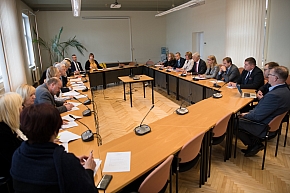 “The development of the Baltic region requires a close parliamentary cooperation between Latvia, Estonia and Lithuania. Likewise, it is essential to work closely together with the government, especially when it comes to ensuring progress in such topical matters as the high-speed railway project “Rail Baltica” or joint procurement of medicines and medical devices,” said  Jānis Vucāns, President of the Baltic Assembly (BA) and Head of the Latvian delegation, after a meeting of the delegation with Arturs Krišjānis Kariņš, Prime Minister, where future cooperation priorities were discussed on Wednesday, 25 September.

The Latvian delegation to the BA and the Prime Minister discussed the progress achieved in implementing the “Rail Baltica” project. Other topics included the Baltic cooperation in the area of environmental protection, electricity and gas market, as well as security and defence.

Among other priorities, A.K. Kariņš specifically emphasised the importance of the Baltic cooperation in the process of drafting of the next EU Multiannual Financial Framework, and underlined the need to ensure an equitable funding of the cohesion policy.

J.Vucāns provided the Prime Minister with an overview of the BA activities, pointing out that almost three quarters of the recommendations adopted in the previous year, during the 37th BA Session, have already been implemented.

Furthermore, J.Vucāns underlined the importance of the newly established Baltic Culture Fund, which is intended to promote the Baltic culture on the international arena. Also, thanks to the efforts of the BA, as of 1 July 2019, the automatic recognition of diplomas and degrees is in effect between the Baltic States.