About the SaeimaMain building of the Saeima
PrintPrint without images

Main building of the Saeima 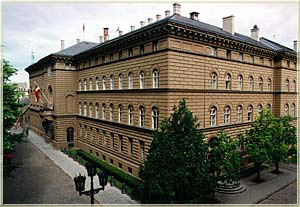 The main building now occupied by the Saeima was constructed between 1863 and 1867 for the needs of the Livonian Knighthood according to the design made by Robert Pflug, a Baltic-German architect, and Jānis Baumanis, the first academically educated Latvian architect.

A statue of Walter von Plettenberg was erected on the façade of the Livonian Knighthood building in the early 1870’s; it was made by Danish sculptor David Jensen from the sketches of Johann Adolf Timm. The sculpture was located in the external niche until 1921, when it was destroyed by fire. During the reconstruction of the building in 1922, the figure of the Master of the Livonian Order was replaced by Rihards Maurs’ statue of Lāčplēsis (Bearslayer). It was barbarically destroyed in the early 1950’s. Since 2007 the Lāčplēsis sculpture can once again be seen on the façade of the Saeima building. The new statue was made by Edvīns Krūmiņš from the photograph of Rihards Maurs’ work. 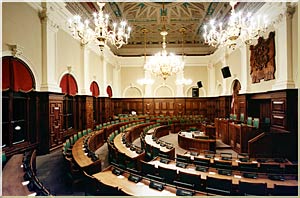 Both the exterior and interior of the building were designed in the style known as Eclecticism. Features of the Renaissance style appear in the outward shape of the building and the main function room where Livonian Landtag meetings and celebrations were held. The style of Louis XVI inspired the design of the interior of the Yellow Room, and the Gothic style influenced the layout of the Dining Room. Those were considered to be among the most impressive public building interiors in Riga.

The Constitutional Assembly became the owner of the building in 1920. The People’s Council and the Government of the Latvian SSR headed by Pēteris Stučka had already used it before that year. On 17 October 1921, the building was maliciously set on fire, and as a result the main function room, which had been used as the Assembly Hall, burnt down. It was restored according to the design of architect Eižens Laube and adapted to the needs of the parliament of the Republic of Latvia. Minor changes were also introduced in other function rooms.

The last meeting of the Constitutional Assembly took place in the newly renovated premises on 3 November 1922, and the first sitting of the Saeima was held on 7 November. The subsequent Saeima convocations worked in the building until parliamentary work was interrupted on 15 May 1934. After the coup staged by Kārlis Ulmanis, the former Saeima building housed the president’s administration. After the Soviet occupational regime came to power in 1940, the building passed to the Supreme Council of the Latvian SSR. 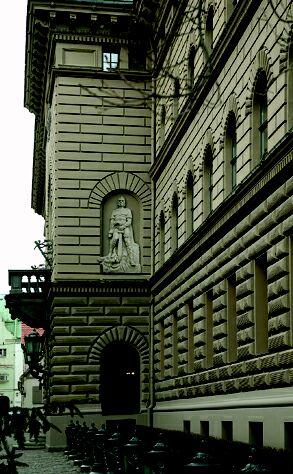 During World War II, the building housed the SS (Schutzstaffel) and police headquarters of the Eastern territories. At that time, the interior decoration of the function rooms was destroyed while most of the books, applied art objects and paintings which had been preserved since the time of the Livonian Knighthood and the independence period of the Republic of Latvia were taken away to Germany. More items of the artistic heritage were lost in the post-war period, when the Supreme Council of the Latvian SSR resumed possession of the building.
After the renewal of Latvia’s independence was proclaimed in 1990, the Supreme Council of the Republic of Latvia worked in the building until it was replaced by the 5th Saeima. Since then, all subsequent Saeima convocations have been working in it.

The building has been reconstructed several times. In the early 1980’s, one of the inner courtyards was walled up to form a new room which at present is the Voting Room. In 1996, the vestibule and the large marble staircase were painted anew to create an impression closer to the style of Eclecticism. In 1997, architect Andris Veidemanis, in cooperation with SIA AIG, designed a new interior of the Plenary Chamber which approximated the design created by Eižens Laube. The amphitheatre layout was used to suit the needs of plenary sittings.

The function rooms feature interior decorations, some sets of furniture and certain objects of applied art preserved from the time when the building was constructed. The collection of objects of art is continually growing thanks to gifts presented to the Saeima by prominent guests.

Guided tours of the main Saeima building are arranged for groups of visitors.

Architecture of the Main Building of the Saeima

History of the Main Building of the Saeima