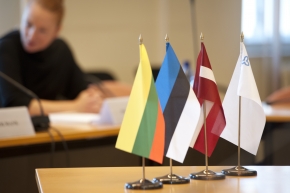 On Friday, 4 October, the Joint Jury convened in the Saeima to evaluate nominees for the Baltic Assembly prizes, and it decided to award this year’s Prize for Science to Renāte Blumberga.

“Although the Livonian language, history and other aspects have already been studied, Renāte Blumberga’s scientific work has contributed immensely to compiling historical testimonies in Latvia, Estonia and Finland,” said Valdis Muktupāvels, a member of the Jury from Latvia. The expert also stressed that Latvia is not the only home land of Livs, as this ethnic group has been studied by their ethnic brothers – Finns and Estonians. Therefore, the research carried out by Blumberga is of international importance and will foster cooperation in Livonian studies among various countries, said Muktupāvels.

The Prize for the Literature was awarded to Donaldas Kajokas, Lithuanian poet, essayist, prose writer, nominated for his poetry To the Deaf Little Donkey (Kurčiam asiliukui), 2011, and the novel The Lake and its Escorting Persons(Ežeras ir kiti jį lydintys asmenys), 2012.

This year’s Prize for the Arts will go to Peeter Vähi (Estonia), composer, nominated for composing the oratorio Maria Magdalena, 2011, that is composed on gospel texts in original Coptic language.

It is planned to award the prizes during the annual session of the Baltic Assembly, which will take place on 28 November in Riga. Each prize is EUR 5,000.

The Joint Jury consists of nine experts in literature, science and the arts from Estonia, Lithuania and Latvia.

The other nominees for Baltic Assembly prizes of this year were as follows:

in science:
•    Prof. Rainer Kattel (Estonia), scientist, nominated for the best completed and published research of the last three years on topics bridging the fields of public administration, economics and innovation in the Baltic countries;
•    Prof. Habil. Dr. Juozas Vidas Gražulevičius (Lithuania), nominated for his achievements in materials chemistry and engineering, for the active collaboration with the scientific partners from the Baltic States initiating and implementing research projects.

The Baltic Assembly Prize was established in 1994, and it has been awarded to several well-known persons in the field of culture, science and the arts. In 2012, journalist Aivars Kļavis was awarded with the Prize for Literature for his tetralogy On the Other Side of the Gate (Viņpus vārtiem). Last year’s Prize for the Arts was awarded to the Estonian artist group Visible Solutions LLC for artistic achievements in integrating Estonian, Latvian and Lithuanian art scenes into one discussion arena. Prof. Dr. Habil. Algis Petras Piskarskas from Lithuania received the Prize for Science for his pioneering research in the field of laser physics and nonlinear optics, for development of innovative laser instruments and for fruitful international collaboration in Europe and worldwide.