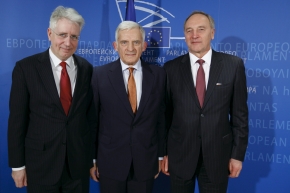 After meeting with officials of the European Parliament, chairmen of the Saeima committees concluded that the EU’s policy regarding direct payments in agriculture will be changed in favour of Latvian farmers; however, discussions will continue on the method for calculating allocations and specific amounts of funds.

On 10 and 11 January, Imants Lieģis, Chairman of the European Affairs Committee, and Andris Bērziņš, Chairman of the Economic, Agricultural, Environmental and Regional Policy Committee, visited Brussels in order to lobby for an increase in direct payments to Latvian farmers and to discuss issues that are relevant for Latvia regarding the EU’s cohesion policy.

Imants Lieģis admitted that after discussions with officials in Brussels, he is cautiously optimistic: “The European Commission has sent a clear signal that after 2014 Latvian farmers will receive more funds; however, the specific amounts of funds are still being negotiated. We understand that currently Brussels is cautious because future discussions on the Common Agricultural Policy (CAP) will be closely linked to the multiannual financial framework.”

“The positive message from Brussels is that EU’s agricultural policy will be reoriented towards free market principles,” indicated Andris Bērziņš. He emphasized that representatives of national parliaments should change their tactics and get involved in the policy-shaping process in Brussels in the early drafting stage. “Active involvement of parliament will help to clear up past misunderstandings and eliminate deficiencies in the agricultural policy; it will also positively influence the promotion of Latvia’s interests in the future,” said Bērziņš.

During discussions with officials, Lieģis stressed that in the context of the future agricultural policy, it is particularly important for Latvia to review the system of direct payments and to ensure a fair and equal conditions for Latvian farmers. Representatives of the Saeima offered their method for calculating future direct payments and emphasised the need to focus support on small and medium-sized agricultural enterprises.

The committee chairmen acknowledged that the news about agricultural issues was positive, but the signals regarding Latvia’s capacity to adequately absorb funds available under the EU’s cohesion policy were negative. “Brussels is apprehensive about the fact that in Latvia one and the same institution is responsible both for granting funds and for monitoring their use,” points out Imants Lieģis. In view of the fact that access to Structural Funds is essential for our country, both committees plan to monitor the disbursement of EU funds more closely and actively in the future.

Chairmen of both committees noted that with regards to the agricultural policy, Latvia has to cooperate with all the EU member states, including Poland, which in the second half of 2011 will take over the presidency of the Council of the EU and thus will have a significant role in shaping the CAP.

During talks with representatives of the European Commission, Lieģis also brought up the subject of Latvia’s representation in the highest positions of the EU institutions.