Speaker of the Saeima celebrates the Baltic Unity Day in Palanga 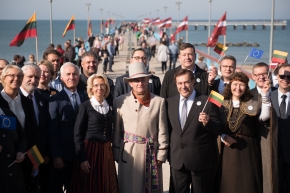 On Saturday, 23 September, Ināra Mūrniece, Speaker of the Saeima, participated in the Baltic Unity Day celebrations in Palanga, where, in an address, she underlined that it is not just the Baltic identity that unites Latvia and Lithuania, but also the need to stay together in the light of current global events.

“We continue what our ancestors began. We have stood together through the most challenging turns of fate, we have fought together for independence, and we have supported each other. Together we have established close cooperation with our friends – the Baltic and Nordic States, the European Union and NATO,” Speaker Mūrniece said.

“Although we compete with each other and the implementation of the joint Baltic energy and transport projects is not always smooth, sooner or later we end up agreeing that it is better to move forward together,” noted Speaker Mūrniece.

The Speaker of the Saeima underlined that our unity and cooperation depends on a deeply rooted and genuine conviction about its necessity: “Let us continue supporting each other and work together for the benefit or our peoples. Let us cherish our shared Baltic identity, our culture, and the independence of our states.”

Viktoras Pranckietis, Speaker of the Lithuanian Seimas, also delivered an address at the opening ceremony of the Baltic Unity Day celebrations.

Today, the Speakers of the Latvian and Lithuanian Parliaments participate in a variety of events dedicated to the Baltic Unity Day, including the ceremonial procession, several exhibitions in honour of Baltic unity and the founders of the independent states of Latvia and Lithuania, the award ceremony of the students’ competition “Battle of Minds”, as well as the Baltic Gastronomy Festival.

The Baltic Unity day was established to commemorate the Battle of the Sun of 22 September 1236, in which the joint Semigallian and Samogitian forces defeated the Livonian Brothers of the Sword. In 2000, the Latvian Saeima and Lithuanian Seimas established 22 September as an official day of remembrance. Last year the Baltic Unity Day celebrations took place in Liepāja.