NewsPress releasesSpeaker of the Saeima: the foundation of our statehood, laid a century ago, continues to strengthen Latvia

Speaker of the Saeima: the foundation of our statehood, laid a century ago, continues to strengthen Latvia 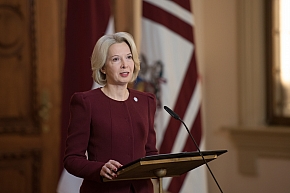 “This year, we will celebrate the events that formed the foundation of our statehood. This foundation was laid by our predecessors a century ago, and it continues to provide Latvia with strength, independence, and the capacity to grow,” said Ināra Mūrniece, Speaker of the Saeima, in the opening event of the centenary year of the Saeima on Tuesday, 18 January.

“The time that separates the 1st and the 13th convocations of the Saeima is long, yet short. We may also notice some similarities between the two convocations. Both had to deal with heated debates and considerable fragmentation, but, at the same time, both were greatly aware of the issues that are important to the state and the public. Both share the awareness that the fundamental mission of the Saeima is to represent the nation,” said Speaker Mūrniece, wishing each convocation of the Saeima not only to fulfil its primary duty — the duty of the legislative body —, but also to see its duty from a broader perspective — to work for the benefit of the state and the people, making the state stronger, and the people — happier.

Speaker Mūrniece underlined that this year will also mark one hundred years since the adoption, proclamation, and entry into force of the Constitution — Satversme — of Latvia. “The longevity of our Constitution, adopted one hundred years ago, is surprising and unique,” stated Speaker Mūrniece, noting that neither a coup, nor occupying powers could dwindle the political and legal significance of the fundamental law of Latvia.

“Our Constitution has guaranteed the legitimacy of our statehood under diverse circumstances. It has also vested huge power in the hands of a democratically elected parliament. And yet, the Constitution is a consistent reminder that, in a sovereign state, the power belongs to the people of Latvia, and every Member of Parliament must work for the benefit of the entire nation, not just their voters,” stressed Mūrniece.

“Our Constitution, with its fundamental principles that define the form of government, has been the strongest anchor in all our fights for freedom and independence,” said the Speaker of the Saeima. “The Constitution has allowed us to protect our national interests in different times. Our Constitution is sound and principled, and dictated by high political and moral standards. It is the identity of our state. It is the identity of our nation,” expressed Speaker Mūrniece, thanking the authors of the Constitution of Latvia.

“This year we will have many opportunities to remind ourselves the roots and values that our statehood is based upon, as well as remember the people who have dedicated their lives for the state of Latvia. May that inspire us to work for Latvia today, tomorrow, and always,” wished the Speaker of the Saeima upon concluding her speech.