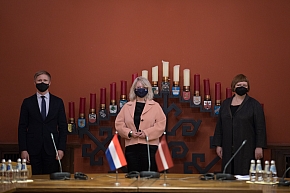 In addition, the parliamentarians discussed the current security and defence situation in the Baltic region and the migration crisis on the Latvian border with Belarus, organised by the Belarussian authoritarian regime as a leverage tool against democratic countries, stated Rihards Kols, Chair of the Foreign Affairs Committee.

Kols emphasised the necessity for the European Union to agree on a joint position and make swift decisions regarding the growing external migration threats, managed and organised directly or indirectly by authoritarian regimes, thus creating direct threats to the security of the European Union. The EU must collectively provide direct and comprehensive support — both financial and technical — to the Member States tasked with protecting the EU’s external border.

Latvia appreciates the contribution of the Netherlands in strengthening the security of the Baltic States, stressed Kols, highlighting cooperation within the framework of NATO.

The parliamentarians emphasised the fact that the COVID-19 pandemic had further highlighted the need to fight the spread of disinformation and fake news. According to Kols, society’s ability to recognise disinformation and fake news needs to be improved, and it is crucial to promote media literacy not only in individual member states, but also at the entire EU level.

The parliamentarians of both Latvia and the Netherlands stressed the importance of support of the international community for the sovereignty and territorial integrity of Ukraine, and discussed the Crimean Platform initiative.

Both parties also discussed the upcoming Three Seas Initiative Summit in Riga, highlighting the need to develop its parliamentary dimension as well.

The discussion was also joined by Members of the Group for promoting cooperation with the Parliament of the Netherlands.