Speaker of the Saeima: the budget of 2021 is for keeping promises 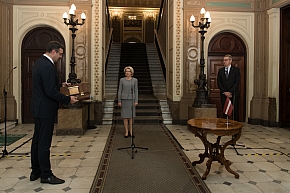 Next year's budget is that of kept promises, and it is vital that the budget will honour the promises given to the public about increasing the salaries of medical and teaching staff. It is also important that the government has been able to find funding to raise the guaranteed minimum income, as well as to boost other valuable areas, which includes funds to continue the housing program, stressed Ināra Mūrniece, Speaker of the Saeima, on Wednesday, October 14, upon receiving the traditional portfolio containing next year's draft state budget and the accompanying package of draft laws from Jānis Reirs, Minister of Finance.

“The Saeima will start working immediately on the new budget, and it is going to be discussed on the e-Saeima platform,” noted the Speaker of the Saeima. She emphasised that the procedure for adopting the budget would be rather demanding, so all MPs are invited to work in the designated rooms of the Parliament in compliance with the distancing rules. “The Saeima offers a good internet connection, which is necessary for us to be able to work properly, and, if necessary, in these premises MPs can also receive IT support at any time,” explained Mūrniece.

At a time when the whole world is dealing with health concerns, significant funds will be allocated to this field in Latvia as well, and, in the history of the country, this will be the largest amount of funds earmarked for healthcare, noted Mārtiņš Bondars, Chair of the Budget and Finance (Taxation) Committee of the Saeima.

As early as on Friday, 16 October, the draft state budget for next year and the accompanying draft laws are to be submitted to the Saeima committees for consideration, and the Budget and Finance (Taxation) Committee, which is responsible for advancing the draft budget law in the Saeima, will commence its work on the new budget on 20 October, informed Bondars.

Next year, the drop in revenue is estimated at EUR 328 million, while the expenditure is to rise by EUR 744 million with the budget deficit widening to 3.9 percent of GDP, noted Minister of Finance Reirs. The budget includes many important aspects, such as better remuneration for medical staff and teachers, funding for independent institutions, exit of the public media from the advertising market, as well as funding for the social sector in compliance with the decisions of the Constitutional Court. Additionally, it is planned to reduce the social security contributions made by employers and employees, as well as to increase the differentiated non-taxable minimum, said the Minister of Finance, outlining next year's budget priorities.