Speaker of the Saeima: transatlantic cooperation is vital for European and global security 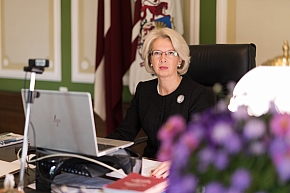 “Transatlantic cooperation is vital for European and global security. Latvia highly appreciates the contribution of NATO to the strengthening of security and defence in the Baltic states and Poland, including the participation of the Visegrád Group countries in the NATO Enhanced Forward Presence and regular air policing missions in the Baltic states,” emphasised Ināra Mūrniece, Speaker of the Saeima, on Tuesday, 6 October, in her opening address at the remote meeting of the chairs of the foreign affairs committees of the parliaments of the Baltic and Visegrád Group countries.

Mūrniece commended the decision made by the Czech Parliament last week to renew the mandate of the Czech Republic to serve in NATO battle groups in the Baltic States and the Baltic Air Policing mission.

Turning to the developments in Belarus, the Speaker underlined the necessity for Europeans to act together and speak with one voice. “We regret that the Belarusian authorities have requested Lithuania and Poland to reduce their diplomatic representations in Minsk. Latvia feels solidarity with Lithuania and Poland,” expressed Mūrniece.

The Speaker pointed out that, last week, the Saeima adopted a statement on the refusal to recognise Alexander Lukashenko as the legitimate president of Belarus. “The secret inauguration ceremony has aggravated the political crisis in Belarus even further, and the next president may only be chosen by the people in a free and fair election in the presence of international observers,” stated Mūrniece. The Speaker also highlighted the need to strengthen the civil society and independent media of Belarus.

Rihards Kols, Chair of the Foreign Affairs Committee of the Saeima, emphasised the active cooperation and dialogue between the Baltic and Visegrád Group countries, which has helped to strengthen policy coordination and the implementation of measures in various fields.

“Considering that the Baltic and Visegrád Group countries share cultural, historical, political, and economic ties, the current common interests and values of our countries are a foundation for deeper cooperation. As the chairs of foreign affairs committees are directly and actively involved in lawmaking, this informal conversation network with an element of parliamentary diplomacy will be an important format for coordinating and focusing on common interests. Cooperation and an open dialogue is indispensable in developing effective policies based on values and mutual trust for our countries, the region, and beyond,” emphasised Kols.

The chairs of the foreign affairs committees of the parliaments of Latvia, Estonia and the Visegrád Group countries — Poland, Czechia, Slovakia, and Hungary — held a remote meeting today to discuss topical issues and joint cooperation in the region at local and international level. During the meeting, MPs talked about defence and infrastructure, energy security, digitalisation and security, cooperation and policy perspectives, the implementation of common initiatives and priorities, and possible joint cooperation in the Future of Europe debates.