HeadlinesPress releasesSpeaker Mūrniece in Jerusalem: it is our duty to keep the memory of the Holocaust victims

Speaker Mūrniece in Jerusalem: it is our duty to keep the memory of the Holocaust victims 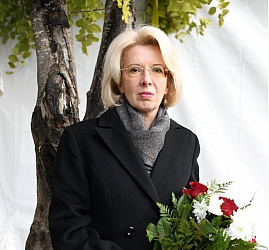 The Holocaust has taught the world that one must never turn a blind eye or remain silent when witnessing inhumane conduct. We must do everything in our power to prevent the taking of human lives on the account of their ethnicity, said Ināra Mūrniece, Speaker of the Saeima, on Thursday, 23 January, in Israel, taking part in the Fifth World Holocaust Forum on “Remembering the Holocaust: Fighting Anti-Semitism”, which gathered political leaders from across the world.

Speaker Mūrniece underscored the deep compassion that the people of Latvia feel towards the Jewish people: “We are too well-aware what it means to be occupied, and to experience the slaughtering of innocent people. In our memories, we cherish those Latvian citizens who helped saving Jewish lives.” Speaker Mūrniece underlined that it is our moral and political obligation to commemorate and research the Holocaust. This is what we uphold both at home and internationally.

The world peace has once again become fragile, and it is of utmost importance to ensure security, said Speaker Mūrniece, urging to keep the memory of the Holocaust victims alive among the generations to come.

The Fifth World Holocaust Forum in Jerusalem brings together more than 46 heads of state: monarchs, presidents, parliamentary speakers, and prime ministers. It is an anti-Semitic summit commemorating the 75th anniversary of the liberation of the Auschwitz-Birkenau concentration camp.

Mūrniece joined the leaders of other countries in a Holocaust memorial service and wreath-laying ceremony in Yad Vashem's Warsaw Ghetto Square.

In Jerusalem, Ināra Mūrniece laid flowers near the Žanis Lipke Memorial Tree, which grows on the grounds of the Yad Vashem World Holocaust Remembrance Centre. The trees in the Avenue of the Righteous were planted to honour the people who risked their lives to save Jews during the Holocaust.