HeadlinesPress releasesInese Lībiņa-Egnere: the Baltic+ Group, initiated by Latvia, will boycott the celebrations and continue to work

Inese Lībiņa-Egnere: the Baltic+ Group, initiated by Latvia, will boycott the celebrations and continue to work 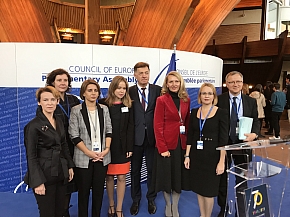 Heads of five delegations to the Parliamentary Assembly of the Council of Europe (PACE) – Estonia, Latvia, Lithuania, Ukraine, and Georgia – signed a joint statement today, on 1 October, in Strasbourg. In the statement, the representatives of the five countries drew attention to the compromised values of the Council of Europe, as the PACE majority turns a blind eye to continuous violations of human rights, the occupation and annexation of territories, war waged by the Russian Federation against its neighbours, as well as countless other violations that the Russian Federation continues to commit after the restoration of its voting rights in the PACE.

The Latvian delegation to PACE explained that the Baltic+ Group was established with the goal of holding PACE and its members to the fundamental principles of the organisation, to maintain the policy of non-recognition of the annexation of Crimea and to regularly condemn Russia’s continued military occupation of parts of Eastern Ukraine and parts of Georgia and Moldova. The next meeting of the Baltic+ Group will be held in Kiev, the capital of Ukraine, in mid-November.

The current part-session of the PACE takes place in Strasbourg until 4 October, and the Chairperson of the Latvian delegation I.Lībiņa-Egnere, as well as Vice-Chairperson Artuss Kaimiņš and Members of the Parliament Boriss Cilevičs, Marija Golubeva, Linda Ozola, and Dana Reizniece-Ozola are participating in the session.

PACE is a statutory body of the Council of Europe focusing on the protection of human rights, pluralist democracy and rule of law, promotion of the understanding and development of European cultural identity and diversity, and seeking solutions to the problems facing European society, as well as strengthening democratic stability in Europe by supporting political, legislative and constitutional reforms.