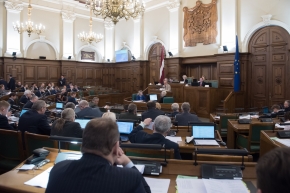 On Thursday, 8 February, the Saeima approved the draft decision “On the proposal to introduce sanctions against the officials connected to the Sergei Magnitsky case” elaborated by the Foreign Affairs Committee of the Saeima. The decision tasks the Cabinet of Ministers with taking appropriate steps to include 49 individuals from Russia in the persona non grata list, banning them from entering the territory of the Republic of Latvia.

Ojārs Ēriks Kalniņš, Chair of the Foreign Affairs Committee: “This decision is a matter of honour for Latvia as a democratic state governed by the rule of law, and a question of conscience of each and every MP. By banning the individuals connected to the Magnitsky case, Latvia follows the example of the US Congress, the parliaments of Estonia, Canada, Lithuania and the UK, which have already adopted relevant legal acts named after Sergei Magnitsky that enable them to apply targeted sanctions against individuals accused of gross violation of human rights, corruption and other crimes.”

It is explained in the decision that Sergei Magnitsky, former lawyer, who revealed that staff members of Russian law enforcement agencies had stolen 5.4 billion roubles from the state budget, was arrested and held in pre-trial custody for 358 days, where he was assaulted and tortured, while denied medical attention, as a result of which he died on 16 November 2009.

It is also indicated in the decision that the relevant Russian authorities have failed to conduct a thorough, independent and unbiased investigation of the circumstances in which Sergei Magnitsky was arrested, tortured and ultimately died. So far, none of the involved officials has been found guilty for these crimes; on the contrary - five of the involved officials have received state awards, while many other have received suspicious financial gains since the tragic events.

The decision emphasises the duty of the countries that have ratified international human rights treaties to abide by them and highlights the moral duty and responsibility of democratic countries to prevent impunity for gross human rights violations, corruption, and large-scale financial fraud schemes. This responsibility includes adopting of relevant legal acts that impose targeted sanctions, such as entry bans, freezing of property and assets, etc. against the perpetrators.

The decision also makes reference to the Resolution of the Parliamentary Assembly of the Council of Europe and the European Parliament Recommendation urging member states to impose targeted sanctions against the individuals connected to the Sergey Magnitsky case. Furthermore, the decision of the Saeima calls on the parliaments of the EU and NATO member states to adopt the so called Magnitsky Laws thus fortifying the principles of fairness, accountability and the rule of law.