NewsPress releasesInāra Mūrniece: Latvia and Romania should continue to join forces to boost NATO presence in the region

Ināra Mūrniece: Latvia and Romania should continue to join forces to boost NATO presence in the region 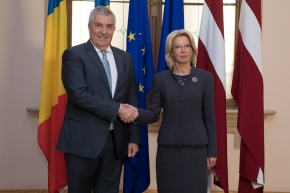 Latvia and Romania should continue to join forces to enhance NATO’s forward presence in the region, both in the east and south-east of the Alliance. Ināra Mūrniece, Speaker of the Saeima, stressed this on Tuesday, 24 October, at the Saeima, during a meeting with Călin Popescu-Tăriceanu, President of the Senate of the Romanian Parliament, who is in Latvia on an official visit.

Speaker Mūrniece and President Popescu-Tăriceanu agreed that we face similar security challenges. The presence of NATO forces in our countries sends a strong signal that we are united and that NATO is ready to defend any member state. The Speaker of the Saeima attested that both the allied presence and the defence spending increase enjoy the support of the Latvian society and the political will.

Speaking about developments in Ukraine, Moldova and other Eastern Partnership countries, Mūrniece and Popescu-Tăriceanu emphasised the importance of the Eastern Partnership framework, which allows the partner countries to move closer to the European Union (EU) and, at the same time, maintain an individual approach. Latvia strongly supports the deepening of EU practical cooperation with partner countries in as many areas as possible, said Ināra Mūrniece.

The Speaker of the Saeima stressed Latvia’s unwavering support for the sovereignty and territorial integrity of Ukraine. Mūrniece and Popescu-Tăriceanu noted that the EU sanctions against Russia should remain in force until the Minsk agreements are fully implemented.

When discussing the future of the EU, Speaker Mūrniece and President Popescu-Tăriceanu agreed that the unity of the EU member states is important. The President of the Romanian Senate noted that the EU should continue to build on cohesion and solidarity, which underpin the growth and prosperity of the EU. The Speaker of the Saeima said that the countries willing to cooperate more closely must be given this opportunity, but cooperation should be open to other countries as well. Latvia wants to be a core EU country.

Speaker Mūrniece wished Romania success in preparing for the upcoming presidency of the EU Council in 2019 and expressed readiness to share the Saeima's experience in implementing the parliamentary dimension of the Latvian presidency in 2015.