HeadlinesPress releasesSpeaker Mūrniece: We want to deepen cooperation with Azerbaijan in trade, transport and logistics

Speaker Mūrniece: We want to deepen cooperation with Azerbaijan in trade, transport and logistics 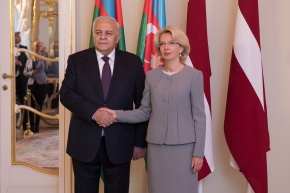 Latvia and Azerbaijan have a good basis for deepening cooperation in trade, transport and logistics. Speaker Ināra Mūrniece stressed this on Monday, 29 May, at the Saeima, during a meeting with Ogtay Asadov, Chairman of the Milli Mejlis of the Republic of Azerbaijan, who is in Latvia on an official visit.

The Latvian Speaker congratulated Mr Ogtay Asadov on the 99th anniversary of the founding of the Democratic Republic of Azerbaijan, which was celebrated yesterday.

For Latvia, Azerbaijan is an important partner in the South Caucasus region. The two countries have an active political dialogue, said Speaker Mūrniece, adding that she also welcomed the good parliamentary contacts.

Latvia sees prospects for further strengthening economic relations. The heads of both parliaments agreed that it is important to make efforts to increase the volume of trade, and in this respect a lot depends on the upcoming meeting of the Latvian– Azerbaijani Intergovernmental Commission in Baku.

Latvia is an important part of the European transport and logistics sector, and we consider Azerbaijan an essential partner in building transport links between Asia and Europe, said Speaker Mūrniece. We welcome Azerbaijan's role in the development of the Southern Gas Corridor, which will significantly contribute to the diversification of the European Union's energy suppliers.

The Speaker of the Saeima attested that Latvia supports strengthening of the EU-Azerbaijan relations. “We welcome the opening of negotiations on a new EU–Azerbaijan comprehensive agreement. At this point, it is equally important to prepare for the upcoming Eastern Partnership summit,” stressed Ināra Mūrniece.

The meeting was also attended by Lolita Čigāne, Chair of the Saeima European Affairs Committee; Romāns Naudiņš, Chair of the Saeima Economic, Agricultural, Environmental and Regional Policy Committee; and Hosam Abu Meri, Head of the Group for Interparliamentary Relations with Azerbaijan. The Azerbaijani parliament is represented on this visit by Kamran Bayramov, Head of the Azerbaijan-Latvia working group on interparliamentary relations; as well as members of the Milli Mejlis: Ulviya Agayeva, Rovshan Rzayev and Malik Hasanov.