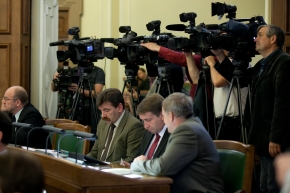 The wording of the amendments adopted in the second reading sets forth that the changes will come into force on 1 January 2013 and that the Cabinet of Ministers has to prepare the necessary Cabinet regulations by that date so that the Law can be implemented.

Latvian citizenship will be made available for Latvians in exile and their descendants who submit a relevant notification. This will apply to citizens who left Latvia because of the occupation regime of the USSR or Germany or were deported and had not returned to Latvia for permanent residence by 4 May 1990.

With regard to Latvians and Livs permanently residing outside Latvia, it will be possible to grant citizenship to those who can prove that their ancestors used to live in the territory of Latvia and that they speak Latvian.

The amendments will also set forth that a child is a Latvian citizen regardless of his or her place of birth if at the moment of the child’s birth one of the parents is a Latvian citizen. Children born in Latvia to Latvian non-citizens after 21 August 1991 will be recognised as citizens if they permanently reside in Latvia and have always been stateless persons or non-citizens. Pursuant to the amendments, a child of a non-citizen will be recognised as a citizen when the newborn is registered if that is the wish of the parent, and the parent will have to certify that he or she will help the child to master the Latvian language as the official language and will raise the child to respect and be loyal to Latvia.

The amendments will also more accurately specify revocation and restoration of Latvian citizenship, renunciation of the citizenship, and the naturalisation procedure. For example, a simplified test will be administered to persons who have received primary education in the Latvian language with more than a half of the curriculum taught in the Latvian language or who have acquired full curriculum of general secondary or vocational education.

The Saeima still has to vote on the amendments in the third and final reading.