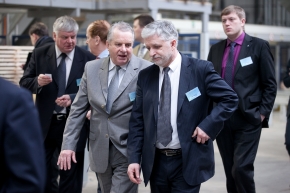 On Friday, 9 March, members of the parliaments of Estonia, Latvia and Lithuania met in Ventspils for a parliamentary seminar of the Baltic Assembly (BA) to discuss the creation of a single cooperation platform of the Baltic States for developing research, technologies and innovations.

The goal of the seminar is to take a look at the best practices in cooperation among European countries in order to understand how the Baltic States can pool their resources for boosting competitiveness in the global market, said Jānis Vucāns, Vice Chairman of the BA Education, Science and Culture Committee, in his opening address.

The Baltic States need to find their own area of excellence. Studies indicate that the most promising innovation and research areas for the Baltic States are biochemistry, physics, environment studies and biopharmaceutics, stressed Vucāns.

MPs and other participants of the seminar also learned how technologically advanced projects are implemented in practice. They visited the Ventspils High Technology Park and SIA Dendrolight Latvija that uses high technology to produce innovative wood materials.

The seminar on Sustainable and Integrated Baltic Research and Innovation Area was attended by five members of the Saeima: Jānis Vucāns (Union of Greens and Farmers), Juris Viļums (Zatlers’ Reform Party), Ņikita Ņikiforovs (Concord Centre), Atis Lejiņš (Unity) and Dāvis Stalts (All for Latvia and For Fatherland and Freedom/LNNK).

Photos from the seminar are available at: https://www.flickr.com/photos/saeima/sets/72157629181939100/
Video: https://www.youtube.com/watch?v=GdkmVifdjX8&context=C4249e03ADvjVQa1PpcFOm0CDMFABv3JipOdsD_9SMpE_rGgzCfk4=
When using the material, please give credit to the Saeima Chancellery.