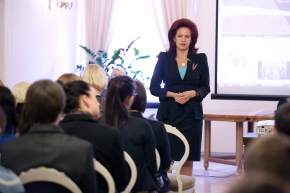 On Wednesday, 16 November, in the Saeima in a cordial and emotional atmosphere youths learned about the history of Latvia’s rebirth – of how brave decisions led to the proclamation of our independence from the Soviet Union.

“There are over 5,000 peoples in the world, but only a little over 200 of them have their own state,” Speaker Solvita Āboltiņa said when meeting the schoolchildren. “November is a special month because 93 years ago on 18 November people unwaveringly decided to create their own independent and democratic state,” said Āboltiņa. She stressed that before 18 November it is important to remember that we a have a state of our own and to discuss it with the young people. The Speaker of the Saeima told the schoolchildren about decisive moments in the restoration of independence and urged the youths to take active part in social processes.

Velta Čebotarenoka, a member of the Supreme Council, shared her memories of the time by vividly describing how the historic decisions were taken on 4 May 1990 and 21 August 1991. “It was a beautiful, sunny day on 4 May when we adopted the Declaration of Independence. An emotional atmosphere prevailed in the parliament building and in the hearts of the people waiting beneath its windows; laughter mingled with tears,” Velta Čebotarenoka recalled.

The member of the Supreme Council described the Barricades of January 1991 as one of the most frightening experiences of her life. Also in August of the same year, during the time when the decision regarding de facto independence of Latvia was made, fear of retaliation by the Soviet regime and concern about personal safety were overwhelming. “There were tanks in the Dome Square, and Soviet helicopters were circling above the city; we felt that the OMON troops might attack at any moment. It was only several hours after the decision was made that we learned about the failure of the Putsch in Moscow,” said Velta Čebotarenoka.

More than 70 schoolchildren from across Latvia participated in this event. Most of them had crimson-white-crimson ribbons pinned to their lapels. They said that this small emblem that they had been wearing throughout the week of celebrations had really made them think about the significance of Latvia’s statehood.

Karīna from Strazdumuiža boarding school is convinced that participation in events like this is educational and patriotic. Schoolchildren were most interested in the recollections of the member of the Supreme Council about the events that led to the restoration of Latvia’s independence in the early 1990s. Zane from Pumpuri secondary school said that she greatly appreciated the stories told by Velta Čebotarenoka, for these were real memories and feelings unlike the usual dry textbook material.

Many children admitted that visiting the Saeima and meeting with the Speaker as well as the member of the Supreme Council has stirred their curiosity, and they are eager to ask their parents about the time when Latvia was still a part of the Soviet Union.

In order for the youths to get a taste of the atmosphere of the decisive moments in Latvia’s history, a screening of documentary video footage of May 1990 and the meeting of the Supreme Council on 21 August 1991 was arranged.