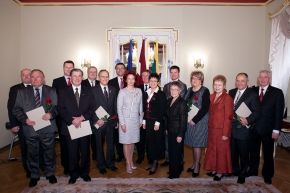 On Thursday, 10 November, Baltic Assembly (BA) medals for outstanding contributions in strengthening unity and supporting cooperation among the Baltic States were awarded in an official ceremony in the Saeima building.

“This is an important moment because it marks 20 years since a new, clearly European history resumed for the Baltic States after all the hardships. We proved to the rest of the world that the unity of friendly countries can change the course of history and can overcome obstacles, political realities and mutual agreements of totalitarian regimes,” said Speaker Solvita Āboltiņa in her address.

“Baltic cooperation is a success story. It is an opportunity that we should cherish, nurture and relate to others so that our achievements can serve as an encouraging example to them,” emphasised Āboltiņa.

The Speaker of the Saeima pointed out that “During 20 years of its existence, the Baltic Assembly managed to stay alive and adapt to the changing times. Its political dimension is increasingly complemented by its proposals and influence in implementing specific decisions that in the end improve the quality of life of our inhabitants. This applies to joint initiatives in the areas of health care, education, environment and many others”. She expressed her appreciation of the expanding cooperation between the Baltic Assembly and the Nordic countries.

The BA medal was awarded to Guntis Ulmanis, former President of Latvia; Anatolijs Gorbunovs, Ilga Kreituse, and Alfrēds Čepānis, former Speakers of the Saeima, as well as Solvita Āboltiņa, incumbent Speaker of the Saeima. Māris Gailis and Valdis Birkavs also received the BA medal for ensuring great progress in Baltic cooperation during their term of office as Prime Minister. Aleksands Kiršteins, who as a member of the Supreme Council actively supported the establishment of the Baltic Assembly in the beginning of the 1990’s, also received the medal.

During the awards ceremony, letters of appreciation of the Baltic Assembly were presented to the staff members and departments of the Saeima who by their zealous work have facilitated and ensured the development of the organisation, as well as built its good reputation.

The medals and letters of appreciation were awarded by members of the BA Presidium – Laine Radjärv, President of the BA, and Jānis Reirs and Paulius Saudargas, Vice Presidents of the BA.

The Baltic Assembly is an interparliamentary cooperation organisation of Latvia, Estonia and Lithuania established for coordinating the Baltic States' cooperation on the parliamentary level, discussing issues and projects of mutual interest and expressing a common position on political, economic, social and cultural issues on the EU and international level. The Baltic Assembly consists of national delegations – 12 to 20 members from each country’s parliament.