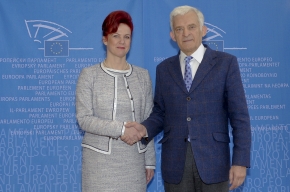 On Monday, 4 April, Solvita Āboltiņa, Speaker of the Saeima, met with Jerzy Buzek, President of the European Parliament (EP), prior to the annual Conference of European Union Parliament Speakers in Brussels.

Āboltiņa emphasized with satisfaction that Latvia was one of the first countries which Buzek visited following his appointment, and she thanked the EP President for his openness and desire to cooperate with the national parliaments of the EU member states. “Now that the Lisbon Treaty is in effect, the role of the European Parliament has grown, and national parliaments also have more opportunities to affect European Union legislation. I am convinced that only by working together we can find better solutions for Europeans,” said the Speaker.

While discussing cooperation between the EP and the Saeima, Āboltiņa stressed that the Saeima holds regular dialogues with Latvia’s members of the European Parliament. For example, issues that are significant to Latvia are discussed in the European Affairs Committee of the parliament.

Āboltiņa invited Buzek as the President of the EP and an active member of the Polish independence movement Solidarity to visit Latvia on 21 August of this year in order to take part in the celebrations marking the 20th anniversary of the de facto renewal of Latvia’s independence. “The twenty-first of August was the turning point in our fifty-year-long battle against occupation, and it marked our return to the Western family of democratic countries. We would like to celebrate this significant anniversary among friends and allies,” the Speaker said.

“One of priorities of my work as Speaker of the Saeima is to increase society’s trust in parliament; that is why much is being done in order to strengthen the idea of an open parliament. The Saeima already has the traditions of Open Door Day and Job Shadow Day, when students are actively involved, and this year for the first time, in cooperation with NGOs, we will hold a Youth Parliament,” explained the Speaker.

While discussing the current economic situation in Latvia, Āboltiņa noted that she regards the future with cautious optimism. “Indicators of the national economy are continuing to improve: the GDP shows positive trends, and the growth of manufacturing and exports is one of the fastest in Europe; Latvia’s international credit rating is also being upgraded.”

The Speaker of the Saeima stressed that it is important for Latvia that in the next EU’s multiannual budget framework the same level of financing in the Cohesion Policy be maintained and that the Common Agricultural Policy be reviewed. “The allocation of direct payments to farmers should no longer be based on historical criteria. The EU should reform the system and make it more honest and equitable for all the member states,” stated Āboltiņa. With regard to topical energy issues, the participants of the discussion agreed that it is important to strengthen the energy independence of the Baltic States by diversifying the sources of energy supplies.

From 3 to 6 April, Solvita Āboltiņa, Speaker of the Saeima, is on a visit to Brussels to participate in the Conference of the Speakers of the Parliaments of the EU and to meet with EU officials.