NewsPress releasesJanis Reirs: Latvia is the most suitable site for constructing a liquefied natural gas terminal

Janis Reirs: Latvia is the most suitable site for constructing a liquefied natural gas terminal 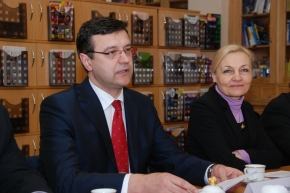 On Friday, 1 April, during the meeting between members of the Latvian delegation to the Baltic Assembly (BA) and Prime Minister Valdis Dombrovkis, it was emphasised that the Baltic States have to make progress in common energy and infrastructure development projects; for example, they need to decide on the location of the proposed liquefied natural gas terminal and on implementing the Rail Baltic project.

Participants of the meeting agreed that one of the priorities for cooperation between the BA and the Baltic Council of Ministers (BCM) is to agree on the location of the proposed liquefied natural gas terminal. Jānis Reirs (Unity), Head of the Latvian delegation to the BA, stressed that construction of the terminal would ensure energy independence. He said that according to experts, Latvia is the most suitable location for this terminal and that other Baltic States will also benefit from it. Imants Parādnieks (national alliance of All for Latvia and For Fatherland and Freedom/LNNK) expressed the view that financial and geographical considerations should determine the choice of the location and that Latvia is in the most advantageous position.

During the discussion on the most significant measures related to implementing joint Baltic transport and infrastructure projects, MPs pointed out that currently the BA is waiting for status reports from relevant line ministers of the Baltic States regarding the Rail Baltica project. Participants of the meeting agreed that it is high time to implement this infrastructure project and that the Rail Baltica project will have to be addressed again in the near future.

Silva Bendrāte (Unity) pointed out that the Baltic States have also launched significant cooperation projects in the social sphere. Currently, the BCM’s Task Force on Health is actively engaged in analysing ways to cooperate in establishing joint procurement of medicines and medical equipment, establishing a joint human organ transplant system in the Baltic States, treating infertility, in vitro fertilisation, establishing a common sperm bank and ensuring cross-border cooperation among Latvia, Lithuania and Estonia. She affirmed that the Latvian side is addressing these issues actively and regularly and that by the end of the year, the first tangible results in implementing these projects will be achieved.

When addressing cooperation with international partners, Reirs affirmed that the BA is actively cooperating with the GUAM Parliamentary Assembly. The experience of the Baltic States in developing regional cooperation can be a guide for the member states of the GUAM in developing their own mechanism of mutual cooperation.

The Baltic Assembly is an interparliamentary cooperation organisation representing Latvia, Estonia and Lithuania. It was founded with the aim to coordinate Baltic cooperation on the parliamentary level, to discuss issues and projects that are common to all three countries, as well as to develop joint positions on political, economic, social and culture issues within the European Union and on the international level. The Baltic Assembly consists of national delegations, each with 12 to 20 members.

The Baltic Council of Ministers is an intergovernmental cooperation organisation of Latvia, Estonia and Lithuania. Its highest decision-making body is a meeting of the heads of governments that is held at least once a year. The task of the BCM is to ensure continuity of cooperation among the executive branches of the Baltic States. The BCM adopts decisions on implementing BA recommendations, addresses issues that are significant from the perspective of Baltic cooperation, as well as drafts and implements measures aimed at broad and targeted mutual cooperation.