NewsPress releasesLatvia has to use the new opportunities to influence EU policy, said Āboltiņa during the meeting with Piebalgs

Latvia has to use the new opportunities to influence EU policy, said Āboltiņa during the meeting with Piebalgs 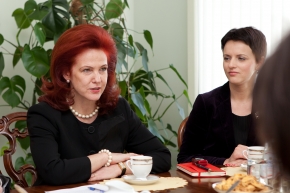 On Friday, 18 March, during the meeting with Andris Piebalgs, the EU Commissioner for Development, Solvita Āboltiņa, Speaker of the Saeima, emphasised that our country has to take full advantage of the opportunities offered by Latvia’s upcoming presidency of the EU and by the Treaty of Lisbon.

The Speaker stated that development cooperation was one of the subjects addressed during the foreign policy debate that was held at the Saeima at the end of January. Āboltiņa indicated that this issue is also topical in the Saeima’s daily work – for example, when sharing our experience with members of the Eastern Partnership that have launched reforms and are interested in benefiting from the experience that Latvia gained during its integration into the European Union.

Both public officials agreed that development cooperation projects, which give us an opportunity to share our experience, can also increase Latvia’s recognisability and international prestige.

During the meeting, Piebalgs stressed that the Treaty of Lisbon has opened up new opportunities for national parliaments to influence EU’s decisions. Āboltiņa indicated that this convocation of the Saeima will adopt decisions on several issues that are vital for Latvia, including the future of the Cohesion Policy and principles for granting direct payments to farmers. On these issues it is essential for Latvia to find partners in other countries in order to jointly protect common interests, emphasised the Speaker.

The Commissioner urged Latvia to get ready for its presidency of the EU in the first half of 2015 in a timely fashion. Both public officials agreed that Latvia should decide in a due time which subjects will be defined as priorities of Latvia’s presidency; it should also strengthen its administrative capacity in areas of national significance, such as the economy and agriculture.

Āboltiņa reported that in the beginning of April she will participate at the annual EU Speaker’s Conference in Belgium. “During my visit, I plan to meet with Jerzy Buzek, President of the European Parliament, and Jose Manual Barrozu, President of the European Commission;  I will use these occasions to highlight issues that are significant for Latvia,” indicated Āboltiņa.