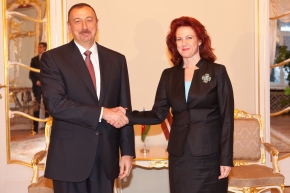 On Monday, 17 January, when meeting with Ilham Aliyev, President of the Republic of Azerbaijan, Speaker Solvita Āboltiņa stressed that the regular exchange in high-level political visits and positive dynamics of economic cooperation attest to strong and friendly relations between Latvia and Azerbaijan.

The President congratulated Solvita Āboltiņa on her election to the office of the Speaker of the Saeima and invited her to pay a visit to Azerbaijan.

During the meeting, President Aliyev thanked Latvia for supporting Azerbaijan in developing its relations with the European Union (EU). Speaker Āboltiņa emphasised that Latvia as an EU member state has always actively supported EU's Eastern Partnership, an initiative that seeks to establish closer partnership relations with Azerbaijan and five other former republics of the Soviet Union. She confirmed that cooperation with the Eastern Partnership countries is our country’s priority, and we are ready to share our experience in carrying out reforms.

Topical issues regarding energy policy were also discussed during the meeting. The Speaker noted that one of Latvia’s priorities is to diversify routes and sources of its energy supplies in order to avoid dependence on a single supplier.

Regarding parliamentary cooperation between the two countries, Speaker Āboltiņa reported that MPs have formed an 18-member group for interparliamentary relations with Azerbaijan. Both parties agreed that this is an important format for political dialogue between the countries. Aleksandrs Sakovskis (Concord Centre), who chairs the group for interparliamentary relations with Azerbaijan, pointed out that, on behalf of the group, he has already invited the Azerbaijani counterparts to make an exchange visit to Latvia in order to discuss the bilateral relations of the two countries in more detail.