NewsPress releasesĀboltiņa: “Closer cooperation between members of the Saeima and Latvian members of the European Parliament is needed for advocacy of Latvia’s interests” 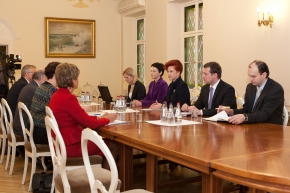 On Friday, 14 January, Speaker Solvita Āboltiņa met with members of the European Parliament (MEPs) elected from Latvia. During the meeting it was concluded that closer cooperation between members of the Saeima and MEPs is needed for advocacy of Latvia’s interests.

Currently, European Union policy is actually domestic policy. Therefore, it is essential for the chairpersons of the Saeima committees and Latvian MEPs to meet on a regular basis. That would facilitate broader discussions on issues that are topical in each specific area, and it would promote national interests on the European level in a more coordinated manner,” acknowledged Solvita Āboltiņa during the meeting.

The Speaker emphasized that regular meetings are particularly important because in the upcoming years the EU will make decisions that will greatly affect the future of Latvia and its people. For example, currently discussions are being held on the next EU financial framework, which includes the future of the Cohesion Fund and uniform payments for farmers. This convocation of the Saeima will have to lay the groundwork for Latvia’s presidency in the EU; therefore, cooperation between MPs and MEPs is imperative.

Latvian MEPs acknowledged that it is necessary to improve mutual communication because national parliaments have a significant role, particularly in ensuring more rapid and more accurate transposition of EU legislation into national laws.

The Speaker stressed that since Latvia is a parliamentary state, she has planned to meet with the parliamentary secretaries of line ministries in order to improve parliamentary scrutiny and the manner in which issues and interests are coordinated with the executive branch.

After the Treaty of Lisbon came into force, people elected to the Saeima and to the European Parliament have a greater role and responsibility in influencing the common policy of Europe; this is why we have to utilize all our resources in promoting Latvia’s interests, noted the Speaker.

Solvita Āboltiņa also informed Latvian MEPs about the foreign policy debate scheduled for the end of January, and she invited them to take part in it.

At the meeting, Latvian MEPs were represented by Sandra Kalniete, Inese Vaidere, Krišjānis Kariņš and Alfrēds Rubiks. The MEPs and the Speaker agreed that it would be useful to hold this kind of meeting twice a year.

Members of the European Affairs Committee also met with the Latvian MEPs. Imants Lieģis, Chairman of the Committee, pointed out that priorities of the Committee include the EU’s Common Agricultural Policy (CAP), the energy sector, absorption of Structural Funds, and cohesion policy. He also noted that the Committee will invite Latvian MEPs to take part in committee meetings devoted to discussions on national positions that are under their purview. Next week the Committee will discuss the Single Market Act with Sandra Kalniete.

During the meeting, the MEPs and the Committee discussed attempts to reform the CAP and to achieve uniform direct payments in agriculture. They also touched upon the planned work on the Draft Law on Renewables and the stance to be taken by the EU with regard to Belarus.

Photos from the meetings are available at: https://www.flickr.com/photos/saeima

Video from the meeting with the Speaker is available at: https://www.youtube.com/user/SaeimaSAB#p/a/u/0/fVT4S4vZPwA

When using the material, please give credit to the Saeima Chancellery.