NewsPress releases“The heroism, strength and faith we demonstrated in the past will also avail us in facing our future challenges,” said Speaker Solvita Āboltiņa in Vilnius in remembering the Barricades

“The heroism, strength and faith we demonstrated in the past will also avail us in facing our future challenges,” said Speaker Solvita Āboltiņa in Vilnius in remembering the Barricades 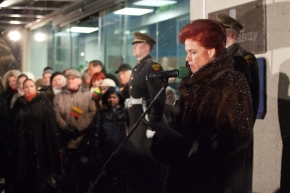 On Wednesday, 12 January, during her official visit to Lithuania, Speaker Solvita Āboltiņa attended the Bonfire of Freedom ceremony held next to the Lithuanian National Radio and Television building where she addressed the participants of the Barricades of 1991 and the people of Lithuania. Speaker Āboltiņa showed her respect to the people of Lithuania by giving a part of her speech in Lithuanian.

“We know what freedom is. We know what justice is. We also know the meaning of captivity, injustice, oppression and aggression. There is a saying: nations that fail to remember their mistakes are doomed to repeat them. One may add that when a nation forgets its heroic deeds and strength, it irreversibly loses its heroism and strength. This is the reason why I call on you to remember the events that took place on the Barricades – the heroism, strength and faith we demonstrated in the past will also avail us in facing our future challenges,” said the Speaker.

Although the Baltic States’ method of regaining their independence is referred to as the singing and non-violent revolution, Solvita Āboltiņa urged us to remember the names of those who perished during these days.

“In January 1991, Lithuania, together with Latvia and Estonia, attracted global attention. Back then, no one could predict how and when the Soviet empire would collapse. But we in the Baltic States already knew that change was inevitable. We also knew that aspirations for freedom had previously been ruthlessly oppressed by the Soviet regime. Our hopes could have been trampled in mud by the same boots that had been worn in 1956 in Hungary and in 1968 in Prague. The people of Lithuania felt it at the moment when OMON troops stormed the Lithuanian television building during a live broadcast. People of all the Baltic States felt it when tanks crushed live human beings with their caterpillar tracks here, next to the television tower in Vilnius,” said the Speaker.

Solvita Āboltiņa emphasised that she is grateful for the opportunity to be together with the Lithuanian people at the commemoration of the Barricades of 1991 in Lithuania. The Speaker noted: “We still remember the events which 20 years ago changed the course of history of the Baltic States and probably, to a great extent, of the entire world. The Baltic States were not merely a part in the fall of the Iron Curtain; they helped to trigger these global changes.”

The Speaker ended her speech with a benediction: “May every hour during these days remind us of our most precious possessions – our own state and freedom. May the bonfire of freedom glow in your hearts forever! May Lithuania, Latvia, the Baltic States be free and flourishing forever!”