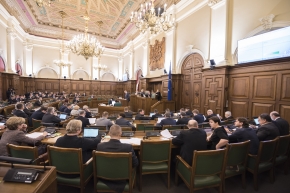 On Thursday, 26 November, the Saeima adopted a draft decision on the National Security Concept.

“Strong and dependable allies, professional and loyal armed forces, and secure borders – these are the main prerequisites for ensuring Latvia’s freedom and independence. However, current situation requires us to go further than relying on the support and security guarantees that we receive as a member of the European Union and NATO; we must also be able to address both internal and external security challenges in order to minimise vulnerabilities on our own,” said Solvita Āboltiņa, Chairperson of the National Security Committee of the Saeima.

The National Security Concept is based on an analysis of national threats, the strategic approaches to avert them, as well as the set priorities in the area of national security. The Concept is available in the public domain.
The adopted document highlights the following eight priorities in averting threats to national security: internal security; threats posed by foreign intelligence and security services; military threats; threats to the cohesion of the civic society; threats to Latvia’s information space; economic threats; threats of international terrorisms; and cybersecurity.

The underlying analysis and the Concept cover a range of threats that either directly or indirectly affect Latvia’s national security. These threats stem from the changes in the international security environment, military activities in the proximity of Latvia’s borders, international terrorism, cybersecurity, as well as attempts of certain countries to apply political, humanitarian, informative and economic pressure to divide Latvian society, tamper with foreign policy priorities and undermine internal stability.

The priorities defined in the Concept will serve as the basis for implementing specific measures and allocating resources under the National Security Plan.

According to Section 27 of the National Security Law, the national Security Concept must be approved by the Saeima at least once during each convocation by 1 October of the first year of its work.

The previous version of the National Security Concept was adopted by the Saeima on 10 March 2011.