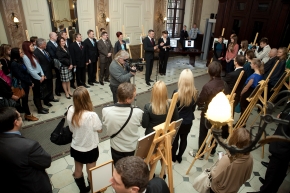 On Thursday, 8 November, Solvita Āboltiņa, Speaker of the Saeima, opened the students’ photography exhibition “Feeling Secure in Latvia”. In her address the Speaker emphasised the value of independence and the importance of preserving it. She also emphasised the responsibility for our nation’s security that we all share. The exhibition offers a view of Latvia as seen by Latvian students and reveals their perception of security in family, among friends, in school and throughout the country.

Altogether there were 54 contestants who submitted 82 photographs. “I am especially happy for the fact that the competition has gathered contestants not only from Riga but also from all of Latvia’s regions – from Valdemārpils, Priekuļi, Liepāja, Dobele, Daudzese, Valmiera, Viļķene, Dricāni and many other places throughout Latvia.

The Speaker of the Saeima expressed her gratitude to the students who participated in the photography contests. She reminded them that on 11 November we commemorate those who sacrificed their lives in 1919, on the Barricades, and in international missions.

Ainars Latkovskis. Chairman of the Defence, Internal Affairs and Corruption Prevention Committee of the Saeima, also thanked the students on behalf of the Committee and pointed out how difficult it was for the jury to choose the best photographs. “The Defence Committee not only is involved in legislative work but also supervises the work of security agencies such as the Army, Police, Fire and Rescue Service and Border Guards. Apart from that, it is important for us to learn what our people think about security. This is a great opportunity for us to look at security matters from your perspective,” said Latkovskis, adding that the exhibition is set up in the premises of the Committee.

“Families and people are the building blocks of a state. Decent families nurture decent people. This is what forms our society and our security,” said one of the contestants Anna Alvīne Vītola, Form 12 student of Sigulda State Grammar School, at the opening of the exhibition. Kristiāna Ozoliņa, Form 9 student of Dobele State Grammar School described the idea behind her submission by pointing out that in Latvia every person is important, and therefore each of us must care for Latvia, cherish it and embrace it protectively. Reinis Pāvils, student of Liepaja City Friendly Invitation 5th Secondary School said that he had captured the sunset of the year in Liepāja Military Port, which was a spectacular background for the warships. The students admitted that they were pleasantly surprised to learn that their photographs had been selected as the best and that they have the opportunity to visit the Saeima.

The Defence, Internal Affairs and Corruption Prevention Committee of the Saeima organised the photography contest in honour of Lāčplēsis Day with a view to promote interest in defence and security matters among the students of Forms 8-12.

The jury, which was composed of MPs from the Defence, Internal Affairs and Corruption Prevention Committee; Raimonds Graube, Commander of the National Armed Forces; a representative from the Public Relations Department of the Saeima; and a professional photographer selected 15 of the most creative submissions by taking into account criteria such as technique, originality and artistic value.

Photos from the event are available at: https://www.flickr.com/photos/saeima/sets/72157631959103911/
When using the material, please give credit to the Saeima Chancellery.