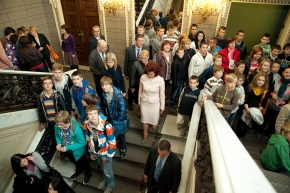 On Friday, 28 September, the Saeima organised the traditional Open Door Day, which attracted almost 2,000 visitors who were keen to wander the halls of the main building of the Saeima, learn about the interior design and explore its history. They were also offered an opportunity to learn more about parliamentary work and civic participation.

During Open Door Day, the visitors had a chance to see more than what is shown on ordinary guided tours. Today the visitors could witness Andris Vilks, Minister for Finance, ceremonially handing over the briefcase containing the draft state budget for 2013 to Solvita Āboltiņa, Speaker of the Saeima. They could also watch Solvita Āboltiņa greeting the Ambassador of the Netherlands and taking joint photos in the White Room. The Speaker also welcomed visitors to her office, where she described her functions and daily work.

The exhibit of trophies won by the Saeima sports teams in various competitions attracted heightened interest from the visitors.

Also the Information Exchange Fair hosted by NGOs such as Delna, Civic Alliance – Latvia and Gudrasgalvas.lv was very popular among the guests who wanted to learn about taking a more active part in the decision-making process and monitoring the daily work of MPs.

As a part of the Information Exchange Fair, schoolchildren were keen to learn about the Youth Parliament project. Former members of the Youth Parliament shared their experiences and memories, encouraging the schoolchildren to sign up for the following convocations. The visiting teachers showed great interest in the programme “Meet the Saeima”, and more than 40 schools from Riga, Aloja, Silene, Daugavpils, Rēzekne, Balvi and Liepāja applied for participation. The programme involves MPs and staff members of the Saeima visiting schools and explaining the work of the parliament to schoolchildren through an interactive learning process.

Schoolchildren were among the most enthusiastic visitors of the Saeima. As usual, they were surprised to learn that in real life the Plenary Chamber is much smaller than they thought it was judging from the TV broadcasts. The visitors were also mesmerised by the impressive national coat of arms made of oak. Visitors acknowledged that the ornate interior of the main building of the Saeima, especially the function rooms, was very impressive.

A teacher noted that the quiz about the interior of the Saeima not only tested the schoolchildren’s knowledge and attentiveness but also added a more exciting and interest-provoking angle to the visit.

The Speaker of the Saeima also organised a special guided tour, where she informed the guests about the interior of the building, the plenary sittings, the daily routine of the parliament and the exhibits. Many MPs were happy to use the opportunity to meet with the guests, share their experiences and contribute to the guided tours.

The guests were also welcomed to visit the Voting Room, which featured the digital photography exhibit “MPs in the eyes of MPs”, where MPs Ingmārs Čaklais, Janīna Kursīte-Pakule and Vladimirs Nikonovs displayed their photographs of their colleagues at work at the Saeima.

Each visitor received a souvenir in the form of an informative booklet that helped them to navigate the building. The lenses of the visitors’ cameras captured many memorable moments, including group photos with the Speaker and MPs.