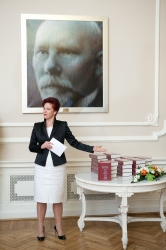 The Constitution (Satversme) reflects the fundamental values and objectives of our state and society, as well as the idea and meaning behind the founding and existence of the state of Latvia, which is the existence through centuries of the Latvian nation, language and culture. Over the years the Constitution has truly become a symbol of our nation’s pursuit of independence and its desire to live in a free, democratic and lawful state. It has been a strong guarantee not to lose ourselves in the tides of time and history. This was emphasised by Solvita Āboltiņa, Speaker of the Saeima, on Wednesday, 13 June, at the opening of the 90th anniversary edition of the Constitution of the Republic of Latvia. This edition contains the text of the Constitution in several languages, as well as historical information and important publications pertaining to the fundamental law of the state.

“We must remember and respect the fathers of the Constitution, who used the mandate of trust awarded by the people to decide Latvia’s future in the Constitutional Assembly. I especially want to mention and congratulate those individuals who helped restore the Constitution to power more than twenty years ago,” the Speaker of the Saeima said.

In her address the Speaker of the Saeima emphasised the uniqueness and importance of the fundamental law of Latvia not only on a national, but also an international level – the Constitution is one of the oldest so-called living constitutions in Europe. Āboltiņa appreciated the fact that the anniversary edition of the Constitution contains its translation in English, French, German, Lithuanian, Russian and Estonian; for the first time the Constitution is also available in the Liv language and in written Latgalian, which is a dialect of Latvian.

“I am convinced that the translations will be a valuable and interesting source of reference for foreign legal experts and practitioners, students of law and anyone who wishes to enhance their knowledge in constitutional rights,” Āboltiņa remarked.

Jānis Pleps, Legal Advisor at the Legal Bureau of the Saeima and one of the scientific editors of the publication, pointed out in his address that our Constitution is unique in the European context because it was restored to power 60 years after its suspension, and that is precisely what makes the fundamental law of Latvia interesting to foreign researchers. During the event Daina Ābele, Chairperson of the Board of Latvijas Vēstnesis – the publisher of the book – presented the first copies to the Speaker of the Saeima and the supporters of the publication.