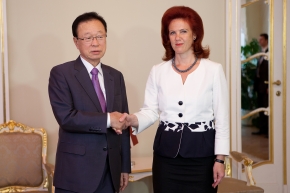 On Wednesday, 6 July, Solvita Āboltiņa, Speaker of the Saeima, met with Park Hee Tae, Speaker of the National Assembly of the Republic of Korea, who is on an official visit to Latvia from 5 to 7 July. During the meeting, the Latvian Speaker emphasised that this year marks the 20th anniversary since Latvia and South Korea established diplomatic relations and that this high-level visit not only will give a new impetus to closer bilateral relations in economy, culture and education but also will contribute to opening an embassy in Riga.

With regard to ways of fostering contacts between Latvia and South Korea, Solvita Āboltiņa expressed the hope that South Korea will consider the possibility of opening its Baltic diplomatic mission in Riga. Park Hee Tae explained that an agreement in principle on establishing a permanent mission in Riga has been reached and that the embassy will stimulate relations not only with the Baltic States but also with the broader region.

The Speaker of the Saeima stressed that Latvia is eager to strengthen economic cooperation with the Republic of Korea and to promote tourist exchange even more actively. South Korea is a highly developed global economy, a strategic partner of the European Union (EU) and the 8th largest trade partner of the EU, as well as a member of G20, noted the Latvian Speaker.

As an EU member state, Latvia would like to take advantage of the opportunities that could be offered by South Korean investments and the Free Trade Agreement between the EU and South Korea because numerous customs-related obstacles will be eliminated, pointed out Speaker Āboltiņa.

The Speaker of the National Assembly stated that in order to mark the anniversary of the establishment of diplomatic ties, the Republic of Korea will present various cultural programmes in Latvia, and many South Korean artists will visit Riga.