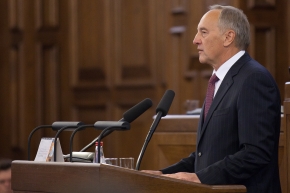 On Thursday, 2 June, Andris Bērziņš was elected as the President of State.

In the second round of election, with a secret ballot 53 MPs voted for and 44 MPs voted against Bērziņš.

Pursuant to the Constitution, the President of State is elected with the majority of 51 votes.

Andris Bērziņš is an MP, Chairman of the Economic, Agricultural, Environmental and Regional Policy Committee, as well as a member of the Parliamentary Inquiry Committee on Possible Unlawful Actions Related to the Takeover and Restructuring of A/S Parex Banka.