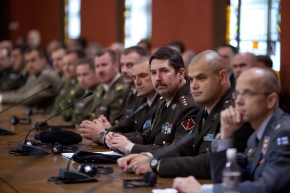 On Wednesday, 25 May, members of the Defence, Internal Affairs and Corruption Prevention Committee met with students and lecturers from the course on Joint Command and General Staff at the Baltic Defence College to talk about current security policy issues, as well as parliamentary oversight of the defence area and armed forces.

Ainars Latkovskis, Chairman of the Committee, stressed that in order to successfully carry out parliamentary oversight of the National Armed Forces (NAF), MPs not only carefully study the information provided by the Ministry of Defence but also hold Committee meetings at military establishments. “We want to talk to soldiers at their place of service, not merely listen to reports presented by generals and officers at the Committee meetings,” said Latkovskis. For example, he mentioned a Committee meeting planned for Friday, 27 May, at the NAF Infantry School in Alūksne.

While discussing cooperation among the Baltic States in the military sphere, Latkovskis suggested that the issue ought to be viewed in a much wider context that encompasses the entire Baltic Sea region. “Military cooperation among Latvia, Lithuania and Estonia is vitally necessary. However, the idea to go even further by including Poland, as well as non-members of NATO, namely, Finland and Sweden, would also be worth considering,” said the Chairman of the Committee.

Regarding previous cuts in financing to the Latvian army, Latkovskis mentioned that the extensive reforms carried out by the NAF can serve as an example of extremely successful structural reorganisation. The Chairman of the Committee also affirmed that despite reduced financing, Latvia will fulfil its obligations to NATO and will continue contributing to the mission in Afghanistan. However, after 2014 the nature of our participation in Afghanistan may change by shifting the focus to civilian assistance and training of Afghan specialists, explained Latkovskis.