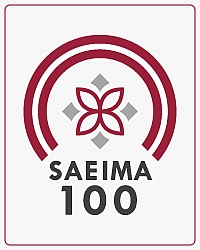 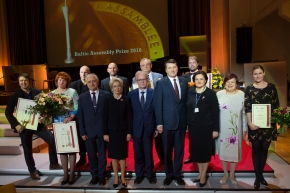 On Thursday, 27 October, during a ceremony held at the culture palace Ziemeļblāzma, Professor Maija Dambrova received the Baltic Assembly Prize for Science for her scientific work on energy metabolism, as well as her contribution to research of the mechanism of action of the pharmaceutical Mildronate.

“I am grateful to all my mentors, colleagues and family members. I hope that my experience will inspire young people, including graduates of rural schools in small countries like ours, to consider career in science, and that my example will strengthen the notion that hard work, dedication, positive thinking and talent can help you reach new heights and win acclaim,” said Maija Dambrova in her acceptance speech.

The BA Prize for Literature was awarded to Lithuanian poet, playwright and translator Sigitas Parulskis for his novel Darkness and Company, as well as his essay collections Wanting Something Tender Before Dying and The Fangs of My Conviction.

This year’s Prize for the Arts was awarded to director Kristijonas Vildžiūnas, who was nominated by Estonia for his movie Seneca’s Day. This joint project of Estonia, Latvia, and Lithuania is the first of its kind. The movie focuses on Vilnius in 1989, telling the Baltic Way story as well.

Jānis Vucāns, President of the Baltic Assembly and head of the Latvian delegation to the Baltic Assembly, congratulated the winners and underlined that there is more to our region than its astonishing nature and the progress we have made since regaining the independence. “The Baltics is the home of these exceptional thinkers who have not only made contributions to our region, but also promoted the Baltic countries beyond our borders,” said Jānis Vucāns.

The prize-winners were chosen by nine literature, science, and art experts from Estonia, Lithuania, and Latvia. The monetary value of each prize is EUR 5000.

The Baltic Assembly prizes for literature, science and the arts, as well as the Baltic Innovation Prize were presented on Thursday, in scope of the 35th session of the Baltic Assembly that takes place in Riga on 27 and 28 October and marks the 25th anniversary of Latvian, Estonian and Lithuanian parliamentary cooperation.

The BA Prize was established in 1994 and since then has been awarded to several well-known scientists, artists, and cultural workers. Last year, the Prize for Literature was awarded to Māris Bērziņš for his novel Svina garša (Taste of Lead). The Prize for the Arts was awarded to Lithuanian conductor Modestas Pitrėnas. The Prize for Science went to Estonian nominees Eva-Clarita Pettai and Vello Pettai for their monograph Transitional and Retrospective Justice in the Baltic States.