Informations généralesCommuniqués de presseInāra Mūrniece, Speaker of the Saeima on. 4 May: Latvia is a part of us and it genuinely needs us

Ināra Mūrniece, Speaker of the Saeima on. 4 May: Latvia is a part of us and it genuinely needs us 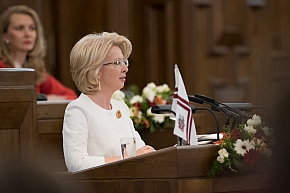 On Friday, 4 May, Ināra Mūrniece, Speaker of the Saeima, addressed the ceremonial sitting of the Saeima in honour of the 28th anniversary of the restoration of independence of the Republic of Latvia. In her address, Spearker Mūrniece emphasised that: “Latvia is a part of us, and it genuinely needs us. Just as the members of the Supreme Council were when voting in favour of restoring the independence of Latvia, today we must also be great in what we think and what we do to be able to defend our Latvia.”

“Over time, major historical events transform into legends, symbols and emotional peaks that provide strength. The vote taken by the Supreme Council of the Republic of Latvia on 4 May twenty-eight years ago was one such epochal event – the culmination of the Awakening, the restoration of independence. The restoration of independence is the second most important moment in our country’s history,” the Speaker of the Saeima said, stressing that we awakened ourselves and changed our destiny.

Speaker Mūrniece highlighted that “behind the 4 May vote, there stood hundreds and thousands of people, who assisted in these invisible efforts and supported them, who were not afraid to put in their work and their time, who rose up and said: “Who else, if not me?!”” Alongside the 138 members who voted in favour of the 4 May Declaration on the Restoration of Independence, the Speaker of the Saeima also expressed her deepest respect to everyone who was involved in the drafting of this historical document – the lawyers, academics and experts, as well as the Citizens’ Congress, which today is remembered undeservedly rarely, but was of great significance in the maintenance of the idea of the state continuity.

Speaker Mūrniece noted with content that “the best result has been achieved. Latvia is a democratic, socially responsible and national state governed by the rule of law. Latvia is a part of Western Civilisation, the European political and cultural space, the North Atlantic security space and the OECD bloc of the 35 most developed countries in the world.”

“However, we are aware that there are still many people living in Latvia who consider our country’s independence a thorn in their side,” Speaker Mūrniece said, noting that: “These people still attempt to impose their imperialistic views upon others, they demand special rights for themselves and wish to dictate their own rules to us, ignoring the laws and language of the country in which they live. But our response is a resounding “No!”, meaning that the state of Latvia and the Latvian language are our legitimate rights,” the Speaker stressed and thanked the patriots of Latvia of all ethnicities, who on a daily basis through their attitudes and work demonstrate loyalty to our state and respect for the values which unite us.

“The Latvian identity is ingrained in the very idea of the state of Latvia – in its very heart,” the Speaker of the Saeima said, emphasising that: “The state of Latvia was founded and its independence restored so that the Latvian nation may exist. We have to admit that we have not yet done enough to cement the identity of a Latvian Latvia; we have yet to fully overcome the consequences of the Soviet occupation.”

The Speaker of the Saeima highlighted Latvia’s achievements in the area of defence. “It is due to the joint efforts of the patriots of Latvia that we are able to celebrate the centennial of our state in security,” she said. Speaker Mūrniece thanked our national Armed Forces, the National Guard, and the troops from NATO member states who stand shoulder to shoulder on Latvian land, taking care of its security. The Speaker emphasised that “National security and defence must be developed also beyond the military domain. The Kremlin’s information warfare makes it increasingly difficult to protect the borders of cyberspace and the borders in our minds. The most protected state is the one where its protection is a matter of honour for each and every member of its society.”

Assessing the work of the 12th of the Saeima, Speaker Mūrniece emphasised that the members of this convocation have worked on several draft laws of great importance. They have improved our security, energy independence, demographics, business environment and many other areas. Recently, we voted for amendments to the Education Law launching transition to an education exclusively in the official language. But people wonder – why did it take twenty-eight years for the Saeima to make this decision? Rather, it was political cowardice that has been dragging us back into the past for nearly thirty years,” Speaker said and went on to emphasise that: “Our language constitutes the identity of our people and our state. Currently it needs a second wind. For once again it is running out of air to breathe. Therefore, the vote on education in the Latvian language is as important as the parliamentary vote on the preamble of the Constitution.”

The Saeima has decided to open the so called KGB archives. The archives must be unveiled by the end of this year and we will have to scrutinise our past. This will require dedication and great moral effort from the entire society. But there is no other way, said Speaker Mūrniece, adding that by untying this painful knot that smothers our nation, we will emerge as a much stronger society.

Another painful problem that stands in our way to prosperity is corruption, it degrades the value of a state, harms its sustainability and reputation. It erodes political, judicial and moral standards. It dismantles democracy, said Speaker Mūrniece, adding that in terms of corruption perception we still have not reached the breaking point, and that in our daily work, we do not think of corruption in geopolitical terms.  Latvians have an extensive experience in nonviolent resistance. This approach could also work against corruption. Society could focus its moral strength to fight against corruption, and in the end we would be surprised how much we all gain from it.

Speaker Mūrniece specifically addressed the youth, pointing out that since the regaining of the independence, a whole new generation has emerged – the children of independence. A generation of free, independent and confident youths who are the ones creating the vision for the development of our state in its next centenary. Education plays a crucial role in this path, and quality education remains the coveted top of the Glass Mountain, which can only be reached through persistence and a drive for excellence.

In conclusion, Speaker Mūrniece underlined that the centennial of our state is the right moment for us to once again form a human chain, for we have a common task of creating a strong foundation that would keep Latvia safe and ensure its development even during the most demanding times of change. “Latvia is the best place in the world for us to live. This is the place where we were born, where we raise our children. This is where we feel the strength of the land on our fingertips, where the sea teaches us about infinity, where we plant oak trees for continuity. This is where we gather at the Freedom Monument and look up to the three stars. This is where we sing “Castle of Light” at the Song Festival”.