NewsPress releasesSpeaker Mūrniece to ambassadors of Latvia: there is currently a particular need for unity of the democratic world

Speaker Mūrniece to ambassadors of Latvia: there is currently a particular need for unity of the democratic world 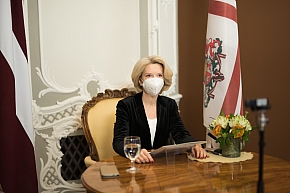 “We have lived behind the Iron Curtain, isolated from the rest of Europe, and we are painfully aware of the need for unity of the democratic world in the situation caused by the current Russian regime. The democratic lifestyle, with all of its advantages, has demonstrated superiority, and protecting it is the interest of the entire Western world”, stated Ināra Mūrniece, Speaker of the Saeima, on Tuesday, 11 January, while remotely attending the annual meeting of the heads of the diplomatic missions of Latvia.

The activity of Russia near Ukraine’s borders is alarming. Russia is concentrating its military forces and making peremptory demands to NATO, said Speaker Mūrniece, adding that the semblance of the Cold War is increasingly stark and frequent. “Due to the current geopolitical situation and existing threats, matters of security are brought to the forefront, and we will continue to enhance our security and fortify our border, which is not only the border of Latvia, but also the external border of the European Union and NATO”, said the Speaker of the Saeima, stating that the NATO Enhanced Forward Presence battlegroup in Ādaži is a clear example of NATO solidarity.

Speaker Mūrniece also highlighted the efforts of Latvian diplomats in EU institutions and the capitals of EU Member States to explain the situation on the eastern border with Belarus and to call upon the Member States for help in funding the fortification of the border.

The Speaker of the Saeima directed attention to the complicated historical issues that continue to be a part of the current agenda. “Russia, our neighbouring state, is actively involved in interpreting historical facts for political gain”, said Speaker Mūrniece, calling for promotion of the work of professional historians, for instance, by establishing a dedicated centre for the study of complicated historical issues. We must fight the propagation of historical controversies by collecting and assessing the facts.

“Regarding the work of the Saeima in the areas of foreign policy and parliamentary diplomacy, it is safe to say that we have promoted the international recognition of Latvian democracy and harmonised our positions with foreign politicians on many issues, and this has been achieved within our region, as well as in distant countries — in both bilateral and multilateral formats,” said the Speaker of the Saeima.

Speaker Mūrniece commended the diplomats in active service, as well as former diplomats, on their contribution to strengthening the national image of Latvia and protecting its interests, also recognising that the families of the diplomats, especially their spouses, who are always willing to move to another country, deserve great appreciation. The Speaker of the Saeima wished the diplomats true satisfaction, working for the benefit of a free, independent, and democratic Latvia.

The annual meeting of the heads of the diplomatic missions of Latvia focused on topical issues of foreign and security policy, EU-related matters, as well as Latvia’s candidacy in the UN Security Council elections, and the Three Seas Initiative Summit, which will be held in Riga in 2022.

The annual meeting of the diplomats of Latvia is held from 10 January to 13 January.