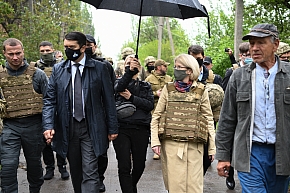 Ināra Mūrniece, Speaker of the Saeima, concluded her official visit to Ukraine by visiting the Donetsk region in Eastern Ukraine with her Ukrainian counterpart Dmytro Razumkov.

The Saeima delegation met with soldiers of the 72nd Brigade in Avdiivka, and the local community of Opytne, which is located in close proximity to the territory controlled by the separatist forces. Here, international financial aid has recently helped to restore the power supply that was destroyed as a result of hostilities.

“At this time, among the blooming lilacs, it is very painful to witness war and the ruined lives of people. Still, we see that Ukrainians have the determination and courage to resist the aggressor, to defend their land. The army is now better prepared, and the soldiers are more motivated. Today, Ukraine is like a shield for all of Europe, deterring Russia’s attack on democracy,” emphasised Mūrniece.

The Speaker of the Saeima delivered humanitarian aid, prepared by the National Armed Forces, to the people of Donetsk and Luhansk living near the line of contact between the Ukrainian forces and the separatists. This was the twenty-second humanitarian aid delivered by Latvia to this region, and this time it included multifunctional beds, a hospital dialysis machine, as well as clothing.

The Speaker of the Saeima and the accompanying delegation laid flowers at the Memorial complex dedicated to Ukrainian soldiers, located between Sloviansk and Kramatorsk.

The Latvian delegation also visited the Honorary Consulate of Latvia in Sloviansk, which was opened earlier this spring. Latvia is the first European Union member state to open a representative office in this region.

The Speaker of the Saeima is on an official visit to Ukraine from 17 May to 20 May. During the visit, the Speaker is accompanied by Juris Rancāns, Chair of the Defence, Internal Affairs and Corruption Prevention Committee, and Ojārs Ēriks Kalniņš, Deputy Chair of the Foreign Affairs Committee of the Saeima.