Speaker Mūrniece in Strasbourg: We must stand firm for Ukraine and international law 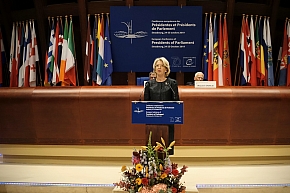 "The Resolution unconditionally restoring full rights of the Russian delegation at the Parliamentary Assembly of the Council of Europe raises doubts about the credibility of this organisation. The resolution was approved while the Russian Federation was continuing its military aggression in East Ukraine and illegal annexation of Crimea. Russia has done nothing to resolve the conflict in Ukraine and Georgia," said Speaker Mūrniece, reminding that Russia's voting rights were suspended in response to the first act of annexation of a territory of a sovereign country since the end of World War II.

The Speaker also underlined the vote of Latvia and other like-minded countries against the Resolution and stressed the interest to restore trust in the Council of Europe and its Parliamentary Assembly.

At the initiative of Ukraine, a meeting of the Speakers of the Parliaments of the Baltic+ Group countries is scheduled to take place in Strasbourg on Friday. On 1 October, the heads of the delegations of Latvia, Lithuania, Estonia, Ukraine and Georgia to the PACE signed a joint statement on the establishment of the Baltic+ Group.

Before the opening of the European Conference of Presidents of Parliament in Strasbourg, the Speaker also met with the Speakers of Parliaments of other Baltic States and Nordic countries (NB8). "Today we all—the Nordic and Baltic countries—have to stand for democracy and fundamental values. We are going to maintain a close dialogue with our Ukrainian colleagues to coordinate our further steps at the Parliamentary Assembly of the Council of Europe," emphasised Mūrniece.

Speaker Mūrniece is in Strasbourg, France, until 25 October to take part in the European Conference of Presidents of Parliaments of the member states of the Council of Europe. Jānis Vucāns, Head of the Latvian delegation of the Baltic Assembly, is also attending the conference.