HeadlinesPress releasesDagmāra Beitnere-Le Galla at the Krynica Economic Forum: Future of Europe lies also in the hands of Central and Eastern Europe

Dagmāra Beitnere-Le Galla at the Krynica Economic Forum: Future of Europe lies also in the hands of Central and Eastern Europe 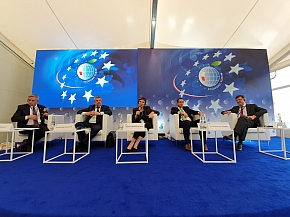 "It is important to build a joint social capital of the Central and Eastern Europe, which would be based on mutual awareness and trust, so that we would be able, through our common history that strengthens our ties, to safeguard the foundations of Europe – Christian and democratic values. The future of Europe lies also in the hands of the Central and Eastern Europe," underlined Dagmāra Beitnere-Le Galla, Deputy Speaker of the Saeima, addressing the audience at the 29th Krynica Economic Forum where she was invited by the Foundation Institute for Eastern Studies.

"Instead of competing, we must look for ways how to implement joint projects where Poland plays a particular role thus creating the core of Central and Eastern Europe," said Deputy Speaker at the session dedicated to building of social capital during times of transformation of the civilization and culture.

Meanwhile, in the discussion "History knocking on our door. Economics and Politics" D.Beitnere-Le Galla emphasized that considering that politics is linked with all areas of economy, a more active involvement of the public in politics is needed, and it is particularly important for a generation of new and fair politicians to evolve.

During the visit, the Deputy Speaker met also with the Latvian Ambassador to Poland, Edgars Bondars. The parties agreed that it is essential for Latvia to be widely represented at such events of high level to inform about developments in Latvia and concurrently to dispel disinformation about Latvia that spreads also in the Polish information space.

The Krynica Economic Forum is among the largest conferences in Central and Eastern Europe, which is held annually in the beginning of September and gathers political leaders, entrepreneurs, representatives of the social sector, as well as journalists from more than 60 countries.