Ināra Mūrniece: love of freedom has never faded in the Baltic people’s hearts 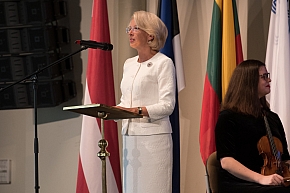 “Only the love that the Baltic people felt towards their land, their people, their language and culture could have produced the resolve, unity and moral certainty embodied by the Baltic Way 30 years ago. It was also about love of freedom, which has never faded in our hearts and remains as strong as ever,” said Ināra Mūrniece, Speaker of the Saeima, in her address before the concert in honour of the 30th anniversary of the Baltic Way on 23 August in culture palace Ziemeļblāzma.

“The Baltic Way was a unique manifestation of nonviolent resistance. After almost 50 years of occupation, two million people – Latvians, Estonians and Lithuanians – joined hands across their national borders to tell the entire world: We remember our statehood! We know it was taken from us unlawfully! We demand freedom and return to Europe!” said I.Mūrniece. She also noted that the Baltic Way is one of the greatest moments in the history of the Baltic States.

The Speaker of the Saeima emphasised: “At that time, when we dreamed about independence, restoring our statehood and freedom, the goals of our people might have appeared as unattainable peaks, as bright stars only to be longed for. Yet these dreams inspired us and we reached our most ambitious goals. The people who attained them still inspire us. Let us never forget our history! We can achieve all of our dreams. As long as there is love in our hearts, as long as we have music and songs, as long as we have our homeland beneath our feet, we can do anything! We can do anything as long as we remember to stand united, hand-in-hand!”

The President of the Baltic Assembly and Head of the Latvian Delegation Jānis Vucāns and Prime Minister Arturs Krišjānis Kariņš also gave a speech to commemorate the 30th anniversary of the Baltic Way.