Egils Levits sworn in as President 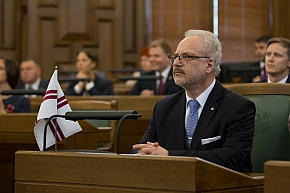 On Monday, 8 July, at an extraordinary plenary sitting of the Saeima, Egils Levits assumed the duties of the President and took the solemn oath: "I swear that all of my work will be dedicated to the welfare of the people of Latvia. I will do everything in my power to promote the prosperity of the Republic of Latvia and all who live here. I will hold sacred and will observe the Constitution of Latvia and the laws of the State. I will act justly towards all and will fulfil my duties conscientiously.”

The ceremonial event was attended by the former presidents of Latvia - Raimonds Vējonis, Andris Bērziņš, Valdis Zatlers, Vaira Vīķe-Freiberga and Guntis Ulmanis - as well as Prime Minister Krišjānis Kariņš, ministers and representatives of the diplomatic corps.

After the oath of office, Ināra Mūrniece, Speaker of the Saeima, ceremoniously awarded the President of Latvia with the highest state awards in accordance with the Law on State Awards.