NewsPress releasesMPs meet with the NATO Secretary General in Brussels

MPs meet with the NATO Secretary General in Brussels 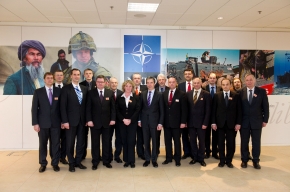 On Monday, 28 March, MPs from various committees of the Saeima met with Anders Fogh Rasmussen, NATO Secretary General, in NATO’s headquarters in Brussels, in order to discuss topical issues on the Alliance’s agenda.

During the visit, both parties discussed future challenges and capacities of the Alliance after the Lisbon Summit, at which NATO’s new Strategic Concept was adopted. They also discussed NATO’s role in the 21st century and its ability to adapt to emerging security challenges. The discussion also covered planning of NATO’s security policy, partnership policy and NATO’s operation in Afghanistan.

The visit by MPs to the NATO headquarters was arranged on the initiative of the Alliance. Travel, accommodation and transportation expenses were fully covered by the host.