AktualitātesSaeimas ziņasMūrniece and Norlén: the Council of Europe must protect democracy

Mūrniece and Norlén: the Council of Europe must protect democracy 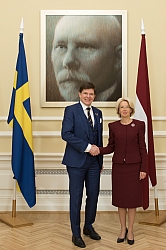 The Speakers of the Parliaments of Latvia and Sweden agreed that the Council of Europe must ensure the protection of the democratic values fundamental to Europe. “The decision of the Parliamentary Assembly of the Council of Europe to restore the voting rights of Russia undermines the influence and prestige of the organisation,” emphasised Mūrniece.

“Latvia and Sweden share powerful historical and cultural ties, as well as close political and economic relations. Sweden is an important economic partner with major investments in the Latvian economy. It is the right moment to deepen cooperation with Sweden both bilaterally as well as within the Baltic and Nordic region. It is in our interest to build up contacts between committees of both Parliaments in areas such as European affairs, education and research, digitalisation, innovation, and climate change,” noted Mūrniece.

Mūrniece and Norlén expressed their commitment to the promotion of an active Eastern Partnership policy and emphasised the role of transatlantic cooperation in maintaining European and global security.

In the morning, at the plenary sitting of the Saeima, the Speaker of the Parliament of Sweden gave a speech about democracy, its challenges and opportunities.

In addition, Dagmāra Beitnere-Le Galla, Deputy Speaker of the Saeima; Jānis Vucāns, Head of the Latvian delegation to the Baltic Assembly; Gatis Eglītis, Deputy Chair of the European Affairs Committee; and Inga Goldberga, Member of the Baltic Affairs Subcommittee of the Foreign Affairs Committee, met with Norlén today.