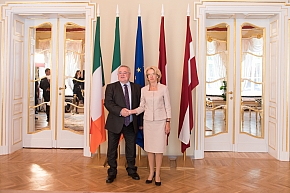 “There is a considerable Latvian community in Ireland, actively contributing to Irish society and economy. At the same time, it is important for us to make sure our fellow compatriots preserve their bond with their homeland, their national identity and culture. Protection of Latvian citizens’ interests abroad is one of the priorities of the Parliament,” underlined Ināra Mūrniece, Speaker of the Saeima, while meeting with Seán Ó Fearghaíl, Chairperson of the Lower House of the Parliament of Ireland, on Monday, 28 May.

Ināra Mūrniece stated that a new Diaspora Law is currently being drafted by the Saeima. Latvia’s diaspora policy also builds upon the best practices from Ireland on how to maintain strong ties with nationals who live abroad.

The Speaker of the Saeima thanked Ireland for the courtesy and practical help in sorting out issues pertaining to our diaspora. Speaker Mūrniece underlined the importance of protecting the best interests of children, stressing the need to further improve cooperation between Irish and Latvian services on matters pertaining to ensuring alternative care for children.

Both speakers also discussed current developments in the European Union (EU) and agreed that the withdrawal of the United Kingdom from the EU, and the Irish border issue in particular, should be managed in a way that leaves no negative impact on the citizens of Latvia and other EU countries. “Latvia supports Ireland’s position on the Brexit deal, including the border between Ireland and Northern Ireland, in order to facilitate further cross-border cooperation at all levels,” confirmed the Speaker of the Saeima.

When discussing the EU’s next multiannual financial framework (MFF), Speaker Mūrniece stressed that cohesion policy funding and convergence, payments to farmers and funding of flagship cross-border infrastructure projects are among Latvia’s priorities. Latvia is against any cohesion funding cuts and calls for equitable direct payments. It is also important for Latvia to secure further EU funding for high-speed train project Rail Baltica. Speaker Ó Fearghaíl reiterated that Ireland shares Latvia’s perspective on the MFF and has similar views on convergence and the need to retain the cohesion policy funding at its current level.

The Speakers also talked about the situation in Ukraine. Speaker Mūrniece informed her colleague about her recent visit to Ukraine, in the middle of May, during which she visited Donetsk, a region heavily affected by the military conflict. The Speaker of the Saeima stressed that EU should not lift its sanctions against Russia until full implementation of the Minsk agreements, considering that the military conflict has not been resolved and has left a devastating impact on Ukraine. The entire EU needs to remain united on the issue.