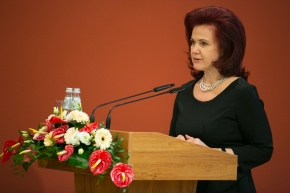 On Thursday, 9 January, Solvita Āboltiņa, Speaker of the Saeima, presented the Cicero Award to Carl Bildt, Swedish Minister of Foreign Affairs. She addressed the prize winner and the participants of the ceremony, pointing out: “They say there are no friends in politics. Latvia’s history has proven otherwise. Sweden has granted shelter to numerous Latvian families that were forced to leave their motherland during the most severe tempests. During the Awakening, it was you, Mr. Bildt, who strongly supported the Baltic States and acted as our voice to reach out across the world”.

Bildt, who is listed among the Top 100 Global Thinkers by the Foreign Policy magazine, received the Cicero Award in the International Politics category for his efforts in promoting bilateral cooperation between Sweden and Latvia.

Āboltiņa emphasised the role of the support from the Swedish people and Bildt’s immeasurable personal contribution to the regaining of independence of the Baltic States. “Today we thank you for your support and your friendship. In January 1991, you were with us in Riga, strengthening the Baltic people and showing the whole world your support for our aspirations for freedom. Likewise, you were with us acting as a mediator in explaining to the United States and European countries how important it is for the region and global community to have independent Baltic States that are free from Russia’s military influence,” said Āboltiņa.

The Speaker recognised Bildt’s immense political courage, as well as the clarity of his vision and commitment to his goals. “You are the one who tells Europe inconvenient truths, you see opportunities, you accept challenges, you not only follow the latest developments but also act as a trendsetter,” said Āboltiņa, adding that in the current digital era, Bildt is well known not only as an exceptional statesman and diplomat but also as a pioneer of e-diplomacy who actively engages in communication through the Internet and modern technologies.

“Strong personalities who not only generate but also implement fresh ideas and follow a steady moral compass, act as indispensable role models and sources of inspiration for all of us. They are capable of steering the fate of people, nations and countries. This award is just another reminder that behind each historic event, there are great people whose courageous decisions and actions have changed history,” said Āboltiņa.
In her address, Āboltiņa underlined that she was honoured to present the Cicero Award to one of the most outstanding European visionaries who has turned his vision of a secure and united Europe into reality, thus earning international respect and recognition.

In conclusion, Āboltiņa wished everyone to maintain strong faith, conviction and enthusiasm in achieving their goals in the interests of their country and to preserve the ability to hear, listen, see, support and reach out a helping hand.

The Cicero Award is a token of public recognition which is awarded annually by the Latvian Academy of Sciences and the University of Latvia. The award celebrates politicians, scientists and publicists for voicing important ideas and promoting social integration at the local, national and international level.

Photos from the meeting are available at: https://www.flickr.com/photos/saeima/sets/72157639576492766/
Copyrights: https://www.saeima.lv/en/copyrights