AktualitātesSaeimas ziņasSpeaker Āboltiņa: the Baltic States renewed their de iure status by joint efforts in fights for freedom and in diplomacy

Speaker Āboltiņa: the Baltic States renewed their de iure status by joint efforts in fights for freedom and in diplomacy 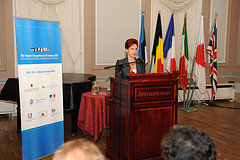 “We should bear in mind that the Baltic States renewed their de iure status by joint efforts in fights for freedom and in diplomacy,” said Speaker Solvita Āboltiņa in her address at the academic seminar to commemorate the 90th anniversary of the de iure recognition of Estonia held in Tallinn (Estonia).

The Speaker quoted the words said by Jānis Čakste, who was then the President of the Constitutional Assembly and later the President of Latvia, at the ceremonial sitting of the Constitutional Assembly held in honour of the de iure recognition of Latvia: “In order to join the community of long-established countries, the Latvian people had to prove that they are able to sustain their state.”

“Sustaining their state. Being able to govern themselves. That takes enormous capacity and hard, persistent work; not all nations have been able to do that. Not every society can become so mature that it can govern itself, as well as create, observe and improve the written and unwritten norms and regulations that a state needs in order to exist. The ability to sustain the state can be evaluated both from internal and external perspective – it reflects our achievements, and shows the opinion and assessment of our partners,” indicated Āboltiņa.

Speaker Āboltiņa highlighted that “Two times Latvia, Lithuania and Estonia have proved that they have this ability – first in 1921, when our statehood was recognised de iure internationally, and 50 years later in 1991, when after a long period of occupation our independence and sovereignty were renewed.”

In her address to the participants of the academic seminar, the Speaker said: “Both 90 and 20 years ago we wanted to belong to the Western community and culture. Western countries have recognised our desire and ability to be integrated into the family of confident, peace-loving and democratic countries.”

Āboltiņa pointed out that de iure recognition determined the future destinies of our nations. “De iure recognition of a sovereign country can become null and void only if the country ceases to exist. If it ceases to exist totally and unmistakably. But the Baltic States are a special case in the world’s history and international law. For 50 years the citizens of the Baltic States both in the occupied territories and around the free world kept the idea of an independent state alive. Embassies of the Baltic States continued to work abroad during these years. Diplomats from the Baltic Sates and the people in exile constantly reminded the world about our rights to independent statehood. Today I would like to remind you that during 50 years the international community did not recognise the unlawful act committed by the Soviet Union. The international community continued to regard the Baltic States as de iure independent.”

On 26 January 1921, the Supreme Council of the Entente unanimously recognised the Republic of Latvia and the Republic of Estonia de iure. Five countries – the United Kingdom, France, Japan, Belgium and Italy – unconditionally recognised Latvia’s independence, indicated Āboltiņa at the seminar.

From 25 to 26 January, Speaker Solvita Āboltiņa is paying an official visit to Estonia, where she is scheduled to meet with Estonia’s top officials. During her visit, the Speaker is accompanied by Kārlis Šadurskis, Secretary of the Saeima, and Vitālijs Orlovs, member of the Mandate, Ethics and Submissions Committee and member of the Latvian delegation to the Baltic Assembly.